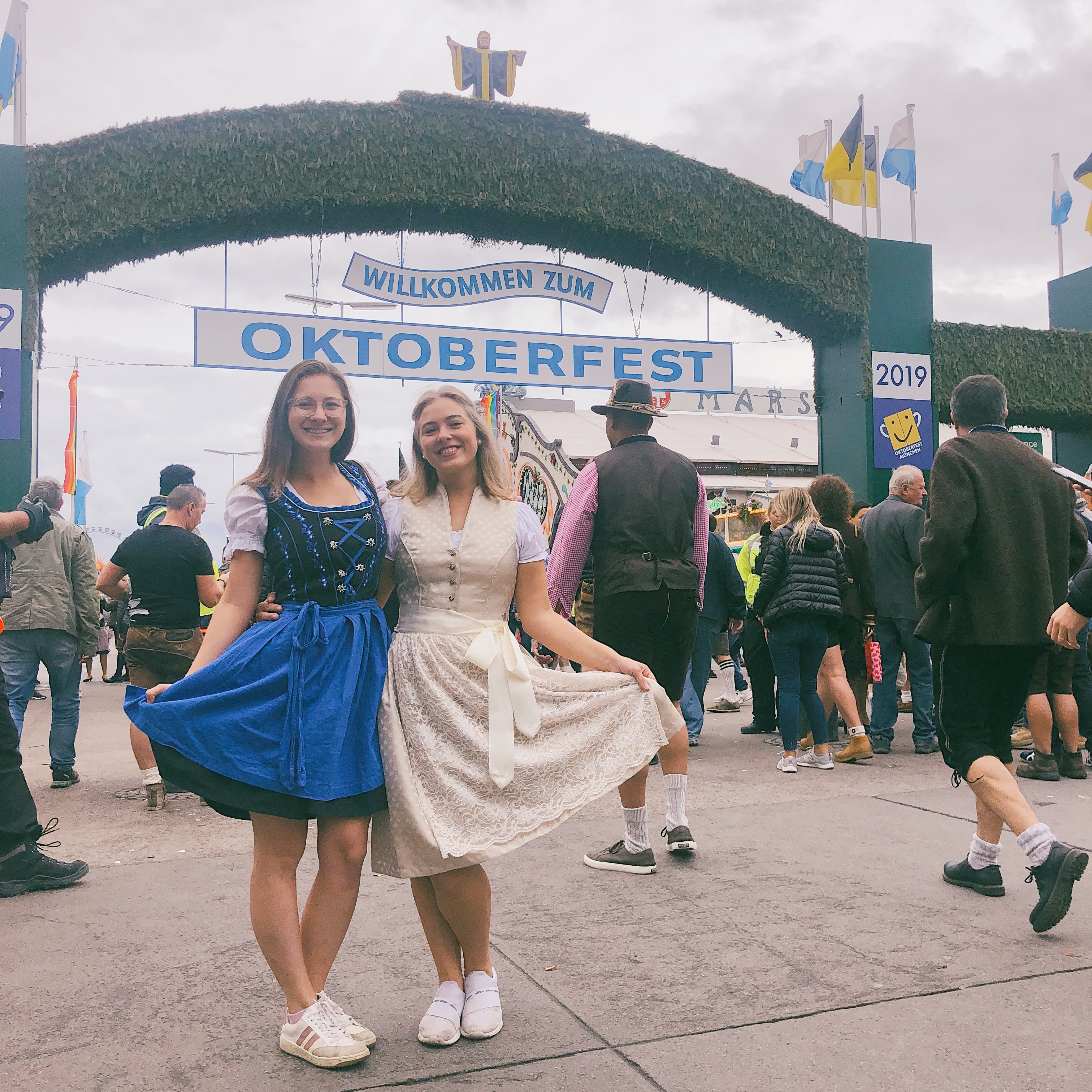 Arriving at Oktoberfest is akin to seeing Disneyland for the first time, except instead of your favorite characters in costumes and “It’s a Small World” playing in the distance, you see floods of drunk men in lederhosen and the faint sound of ‘oompah bands.’ Like Disney, there are still plenty of rides, amazing food, and a sense of magic and discovery lingering in the air. As you walk down the streets, you’ll see both sides lined with massive tents, each housing different prestigious Munich breweries. Each brewery pulls out all the stops and installs giant animatronic devices to astonish and amaze the drunk hoards. To see these structures, you would think that they are completely permanent, complete with wooden beams and animatronic figures, but the good people of Munich construct this wonderland anew every year. The construction takes so long that they begin every year in early July.

We made our way inside the Löwenbräu tent and quickly took our seats. We arrived during a less crowded time, so most of the tables were still unoccupied (a rare sight) and we were able to get a seat close to where the band would play later. The oompah band was on a break in this particular tent when we arrived, so we sat down and ordered two one-liter beers (the only size they serve) to start the day (Alexa, play it’s 5’oclock somewhere).  While making headway into our first beer, a group of students from Korea joined us at our table. After chatting for a few minutes, they gave us their information and generously told us to call them if we ever find ourselves in Seoul. Our favorite part of Oktoberfest (do we have to choose?) is the culture of befriending complete strangers. The tables are designed to be shared, so you are naturally forced together with a lot of different people. 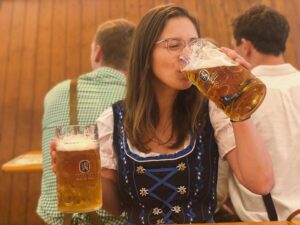 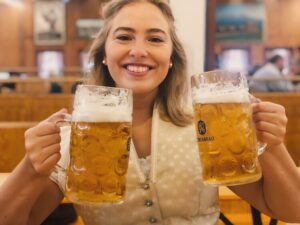 As we heard the trumpets of the oompah band starting to warm up, a group of (very dashing) gentleman sitting near us invited us to sit with them at their table. We learned they were Australian (they’re literally everywhere), and sat with them for several hours drinking beers the size of our heads. While we were enjoying our steins, our friend Joe that we met hiking in the Dolomites (we literally met this guy on top of a mountain) was able to meet up with us. As the oompah band picked up so did our beer drinking and pretzel eating. It was early in the day so festival-goers were still sitting down, as opposed to standing on the benches like they do later in the day when things get a little more rowdy. Pro Oktoberfest tip: standing on the benches is okay (mostly), but never stand on the tables, it’s a sure way to get kicked out of the tents. 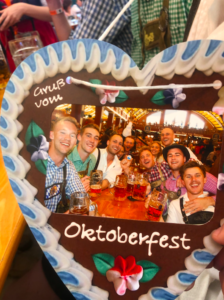 Periodically when the oompah band would finish a song, a person would stand on the bench and finish an entire liter of beer as the room cheered them on. Lauren admittedly bragged about her beer chugging abilities to the Australians and they eventually started egging her on to take on this beer challenge. Lauren, never wanting to back down from a challenge, agreed to do it, but only if they paid for the beer. They of course agreed, and as soon as the beer arrived, we found the perfect opportunity. Totally unsure of herself, Lauren stood up and began chugging. About half way through the chug, Lauren realized this was a lot of beer. It was definitely one of those “oh shit, what have I gotten myself into” moments. However, with the room cheering her on, Lauren successfully finished her beer (mama didn’t raise no quitter!). Immediately after sitting down, a security guard approached the table and told us that what Lauren had just done was “verboten.” We tried to reason with the security guard, stating that we didn’t know and we wouldn’t do it again, but he was not having our excuses (shout out to Joe for sticking up for Lauren to the security guard!). Eventually we heard the guard say “polizei” (German for police) and we knew it was time to leave. 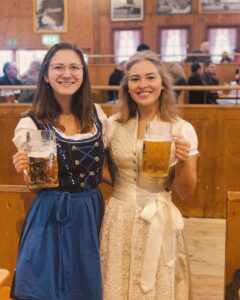 We said goodbye to our new Aussie friends and made our way to the Paulaner tent. At this point, the tents were packed, and we were bummed to have left our great seats and new friends. But because we were at Oktoberfest and making friends is easy, we were able to find new new friends and new seats (though not as good as our last ones) without too much trouble. Lauren left “briefly” to go to the bathroom while Rachel and Joe stayed at our new table. After about 45 minutes, Rachel got worried and went searching for Lauren, yelling her name throughout bathroom stalls. Meanwhile, Lauren wasn’t able to find her way back to the table (the tents are massive, and she also just downed a liter of beer) and with no hope left, she decided to sit down somewhere to eat a pretzel. Rachel spotted Lauren from across the room with a sad “puppy dog” expression on her pretzel-stuffed face. After making eye contact, Lauren’s expression quickly changed to a smile of relief and Rachel was able to reunite Lauren with our table.

We spent the rest of the night dancing on tables (benches) with another group of new friends and had a great time despite our (Lauren’s) bad luck. Coming here together was a dream for both of us, and our experience totally exceeded our already high expectations. We would recommend that every beer lover one day make their own mecca to Oktoberfest in Munich.